Zoysia grass was on our home’s goal list for years before we actually were able to check the box off.

It’s been a full year since we planted our Zoysia grass in the backyard, so it’s a great time for a review! Overall, it wasn’t quite the miracle grass I was hoping for, but it solved the majority of our issues. It’s safe to say it’s not perfect – but we would still choose it again. However we would do a few things differently!

A Homeowner’s Experience With Zoysia Grass

If you’re considering Zoysia for your own yard, this is the post to read!

Your own experience will depend on your unique factors like where you live, and I don’t have a degree in horticulture or landscaping, blah blah blah. But speaking purely from one home owner to the next, as a person who wanted a yard full of green grass to another – this is my experience!

Zoysia glass blade is fine, but all together they are so thick they make up the look of a green rug. The grass blade itself is ridged and stiff, and the color is a greenish gray. In the winter, Zoysia goes dormant and turns brown.

Our situation: We are a family of 6 + an active 70lb dog, living on a half acre in a newly built home in North Carolina. Our foot traffic in our yard is considered heavy.

We have rocky, cheap dirt and hard compacted soil. The original Fescue grass that was planted struggled to grow around a tree that sucked up water:

Once summer drought and NC heat hit, the Fescue thinned out and dead spots took over, especially around a large tree that sucked up water. Our backyard was left with a huge amount of dirt.

After getting quotes for installing an irrigation system (and recovering from the sticker shock!), I was told to look into Zoysia. Although an initial investment, Zoysia would give us a great return with drought resistant, dense green turf that would stay healthy during hot summers and even mild drought.

We hired a landscaper to plant Emerald Zoysia in the late spring (the best time to plant Zoysia is after the chance of frost is past). We choose Emerald Zoysia grass because it is shade tolerant, fairly drought tolerant, and I love the deep color.

My landscaper advised me that sod would be better than using Zoysia grass seed or plugs. He said the labor with seed is more involved, and that the plugs would take almost a full year to grow in. That was all I needed to hear to make up my mind not to use Zoysia grass seed, and to go with the sod.

The Price Of Zoysia Grass Sod

The cost varies on so many factors, but it’s always helpful to understand prices so you can get a ballpark feel.

For our backyard area (roughly a fourth of an acre) we paid $5000 total. This included the cost of the Zoysia sod itself, and then of course the labor to dig up the old grass, till the existing soil, and plant the new sod.

I asked around a little bit in my neighborhood, and was told by others with Zoysia that this was a fair market price for our area.

We were so ready to say goodbye to a yard full of patchy dirt, that I was more than happy to pay!

Zoysia planting week finally arrived! It was a two day project. Day one was devoted to prep. They removed what was left of the old Fescue grass and tilled up the dirt and raked the soil.

On the second, longer day, the sod was laid out and then watered.

A few days later after the sod settled, I was surprised at the size of the seams in the yard. Zoysia is a fast growing grass that spreads itself quickly, and our landscaper said any empty spots would fill in. They did for the most part, but he also had to come back and fill some spots in… so watch out for that.

We were dutiful about watering and the Zoysia grass grew in quickly.

Mid summer, we hired a new landscaper who was more experienced with Zoysia sod.

It wasn’t long before we were hosting BBQs and had the kids running around again, but this time with a thick green carpet underneath their toes!

The trouble spots where our old Fescue grass couldn’t grow turned into thick luscious dark green grass by mid summer. And by the late fall we could only slightly see the seams between the sod pieces.

1 Year Check Up: How Does Zoysia Do In the Spots Where Fescue Couldn’t Grow?

I’ve lived with Zoysia grass for a full year now and we have some thoughts!

The previous trouble spots – areas of heavy, prolonged sun, and areas in deep shade – this is no problem for Zoysia! Just thick green grass.

Is our yard perfect now? No. And it’s not near perfect either. Zoysia grass problems are real – it can be a fantastic solution for your lawn, but it isn’t miracle grass!

It’s important to know that we probably use our backyard more than the average family – so I think most people won’t have the same trouble spots we do.

Our neighborhood is teaming with kids – and our yard seems to be the neighborhood spot to play in. When the weather is nice, it’s common to look out back and see 8 or 9 kids running around! Plus, our 70lb dog loves (and needs) to run for his ball regularly here.

Zoysia is known to stand up nicely to foot traffic. But those areas that are repeatedly used by kids do give us trouble.

The dedicated “first base” and “catcher” spots, (we have lots of backyard Wiffle Ball games), are constantly looking damaged.

The other trouble spot now is by the gate. With kids coming in and out daily – and the gate scrapeing along the top of the grass each time it’s opened, it’s always damaged. We replaced it with new sod recently.

If your yard isn’t as heavily played on, I don’t think you would have these same Zoysia grass problems!

Our current landscaper fertilizes the yard four times a year. He told me he applies 2/3 pound of nitrogen per 1,000 square feet.

Zoysia grass fertizlier is particular so make sure your landscaper is familiar!

As far as my maintenance, I don’t do much except water the perimeter around the tree if we are in a drought. Here in our area it’s common to go a week without rain during hotter months, and those tree roots suck up a lot of water.

Mostly I do this just to take extra care of my investment! You can also have your grass mowed less often with Zoysia.

There is some excess thatch in the yard (dead grass that Zoysia is known for producing), but it’s not bothersome.

There are weeds that pop up. At first the grass squeezed most of them out- but this summer I’ve noticed more growing in.

Our Zoysia Grass In The Winter

Zoysia goes dormant in the winter and turns a dull brown.

It’s ugly. There’s no way around that.

I underestimated how much I would dislike brown grass. With all the other bare branches in the winter, the brown lawn looked even worse.

Once March in NC hits, the dormant grass starts waking up. Below is the Zoysia in the spring time just beginning to green up:

After all is said and done I give our Zoysia grass a B-.

The old dirt backyard is now mostly filled with thick green grass. Our concerns we used to have about excess sun and drought killing our grass are non existent.

There are areas that get heavy foot traffic though that look damaged and trampled.

See our Outer patio furniture review here – or you can see our patio makeover from drab to fab here!

There are still weeds – although not nearly as much as before – but they are still there.

If your yard isn’t as heavily used with children as ours is, it should fair better. Having our kids play in the backyard so much is a good problem to have, so I try not to obsess over the areas of grass damage they inadvertently cause.

I should have used a landscaper that was more experienced specifically with Zoysia to start out with, and I encourage you to take the time to do the same! It’s such a particular grass it’s best to use someone who works with it often and has experience.

He didn’t put new topsoil put down, which was so important. It would have helped our cheap dirt and added beneficial nutrients for the new Zoysia sod. It grows okay in the current rocky soil, but our new landscaper is very adamant that this should have been done for healthier grass.

I think if topsoil was added the Zoysia would be less stressed in areas with heavy foot traffic!

Bottom line- use an experienced landscaper who has worked with Zoysia a lot to save yourself a headache later.

You Will Also Love: 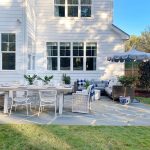 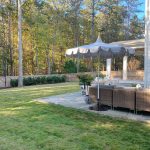 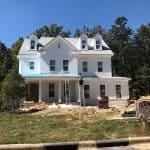 I would love to have you follow along with me below:

6 Gift Ideas For The Home Lover 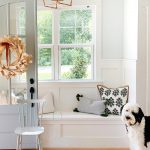